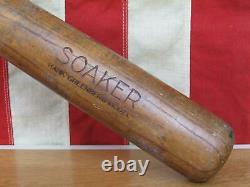 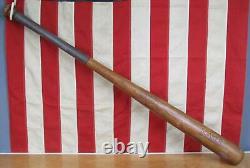 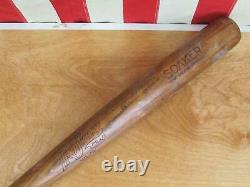 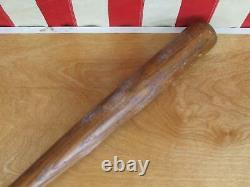 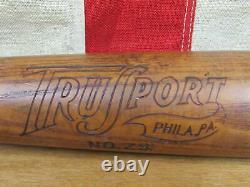 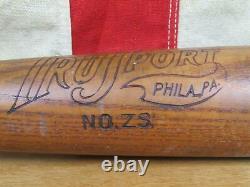 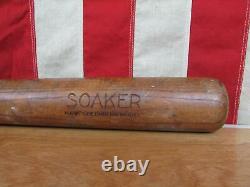 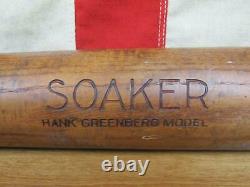 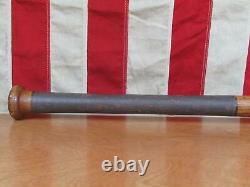 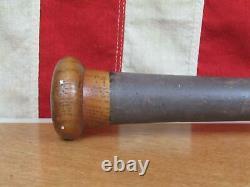 Vintage 1930s TruSport Wood Soaker Baseball Bat Hank Greenberg Model Tryon 36. Please Be sure to see the photos, directly below the Description. Vintage, TruSport Wood'Soaker' Baseball Bat. Hall of Famer & Detroit Tigers legend..
ZS , Rare early Baseball Bat. Tryon Sporting Goods of Philadelphia.
The Bats were made by'Hillerich & Bradsby Co. , then branded with the private'TruSport' Phila, PA. Wood, Bat with distinct early'TruSport Phila, PA. Barrel end branded:'Soaker , Hank Greenberg Model. Bat is solid & sturdy, with No damage. Please refer to the pictures below, for all the specifics.. Henry Benjamin Greenberg nicknamed "Hammerin' Hank", "Hankus Pankus", or "The Hebrew Hammer", was an American professional baseball player and team executive. He played in Major League Baseball, primarily for the Detroit Tigers as a first baseman in the 1930s and 1940s. A member of the Baseball Hall of Fame and a two-time Most Valuable Player Award winner, he was one of the premier power hitters of his generation and is widely considered one of the greatest sluggers in baseball history. Greenberg played the first twelve of his 13 major league seasons for Detroit. He was an American League All-Star for four seasons and an AL MVP in 1935 and 1940.

He had a batting average over. 300 in eight seasons, and won two World Series championships with the Tigers (1935 and 1945). He was the AL home run leader four times and his 58 home runs for the Tigers in 1938 equaled Jimmie Foxx's 1932 mark for the most in one season by anyone other than Babe Ruth, and tied Foxx for the most home runs between Ruth's record 60 in 1927 and Roger Maris' record 61 in 1961. Greenberg was the first major league player to hit 25 or more home runs in a season in each league, and remains the AL record-holder for most runs batted in in a single season by a right-handed batter (183 in 1937, a 154-game schedule).

His career statistics would have certainly been higher had he not served in the armed services during wartime. After retiring from playing, Greenberg continued to work in baseball as a team executive for the Cleveland Indians and Chicago White Sox. If you need any other info/details/measurements, or would like to see additional Pic. Has been grossly misrepresented in description. If you are unsure about fit (measurements), or description of an item..
Get Supersized Images & Free Image Hosting. Create your brand with Auctiva's. Attention Sellers - Get Templates Image Hosting, Scheduling at Auctiva. The item "Vintage 1930s TruSport Wood Soaker Baseball Bat Hank Greenberg Model Tryon 36" is in sale since Wednesday, August 25, 2021.
This item is in the category "Sports Mem, Cards & Fan Shop\Vintage Sports Memorabilia\Bats". The seller is "acevintagerevivalco" and is located in Lititz, Pennsylvania. This item can be shipped worldwide.