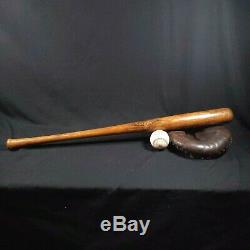 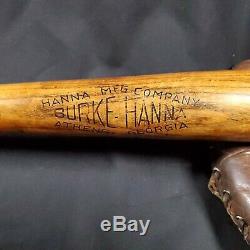 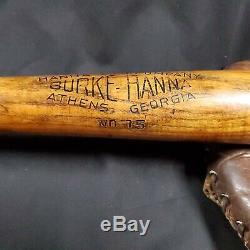 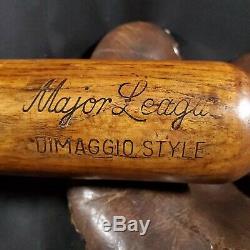 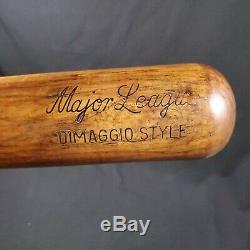 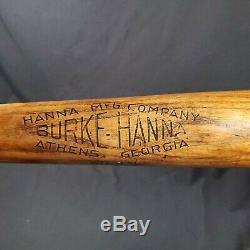 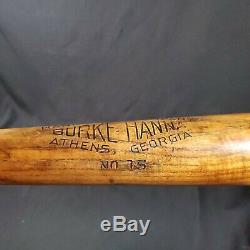 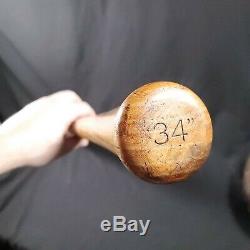 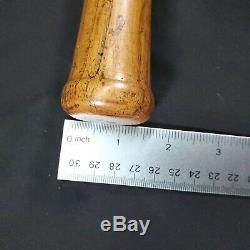 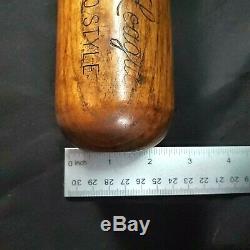 Up for sale is a Vintage 1942 Burke Hanna No. 15 Major League "DiMaggio Style" Baseball Bat in mint condition. This bat is in absolutely perfect condition. There are no cracks, chips or dings anywhere to be seen on this masterpiece. The bat is 34 inches in length and weighs in at 35 ounces. The barrel is 2.5 inches across and the knob on the handle is 1.5 inches across. The way this bat was turned has a really distinct handle as it thickens toward the knob as opposed to tapering down. All of the branding is deep and flawless. The wood this bat is made from has a beautiful shade of brown coloring with an amazing wood grain pattern. The Hanna Manufacturing Company originated in Athens, Georgia in 1911.

They were known for making handles for shovels, hand tools and farm implements. In 1926, Hanna started making toy bats for department stores and a short time later the company was making bats for sporting goods stores, colleges and the Major Leagues. They manufactured bats until going out of business in 1976.

Hanna originally used Southern ash for their baseball bats and hickory for their softball bats. Problems developed with uneven grain in the wood caused by the inconsistent spring seasons of the South. When the dowels were received at the Athens factory, they had to be graded, sorted and stacked to dry. Once the bats were turned, sanded and completely finished, they were branded Hanna or Batrite, depending on the quality. The top grade of bat was called Batrite or WTA and the next grade was called Hanna TA.
In 1933 Hanna patented the Batrite non-chipping treatment used on all bats. In 1935, the Flox "hold fast" grip was introduced and was especially advantageous to those ball players who perspired greatly. A cork grip was marketed in 1936 and, in 1941 the cupped bat came along. This type of bat removed the excess weight from the end of the bat and gave the bat a new center of balance as well as a smoother, more accurate swing. While it is not a signature model (and can not be tied to any specific DiMaggio brother), this bat is still tied to three of the greatest Major League players in history. This bat would make and absolutely wonderful addition to any collection of vintage baseball gear. Why don't you put it in your collection today? Feedback: We aim to earn positive 5-star feedback for every item.

Visit our store and Check Out Our Other Items!! The item "Vintage 1942 Burke Hanna No. 15 Major League DiMaggio Style Baseball Bat- Mint" is in sale since Saturday, February 8, 2020.